Rye's first time at the beach 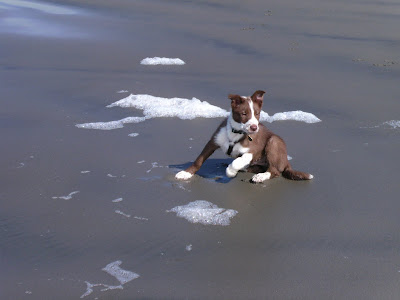 Lead change in the sand

- Met about 20 new people
- Went to puppy class downtown. On the way to class a man jumped out of a Dumpster - very scary! This resulted in some barking but I was able to get Rye onto a toy instead and feeling happy fairly quickly.

- Went to PetSmart
- Went to work every day - 1 accident in 4 days.
- Went on 2 long walks in new parks
- Practiced being a demo dog for beginning obedience

- Tested "okay" as the release for things in his mouth. This went VERY well. He even releases pine cones, socks, etc. I have it on a random, variable reinforcement schedule at this point for maintenance. That means I am reinforcing after a random number of repetitions. By reinforcement I mean offering a toy or treat in addition to verbal praise. I give verbal praise every time, forever.

- Went to the farm and got tethered while Lucy worked. This resulted in several minutes of howling followed by quiet, intense observation.

Last week we should have, but did not:

- Put "down" on cue
- Worked on fixing the noisy crating issue

This week, we are at the beach. Rye did have a puppy lesson at a new location on Tuesday and did very well. He stayed engaged, chose me over the environment, switched easily between treats and toys. We really need to work on the crate thing, which we have been doing some of while we are here at the beach.

We have been working on sends to the crate and on waiting quietly to be let out. I am also working sit-stays inside the crate since his sit stay outside the crate is coming along nicely. Unfortunately I can't let him bark here (don't want to upset the neighbors who are looking for peace and quiet just like we are) so can't work on extinguishing the barking. This is priority #1 for the next 2 weeks. Also putting "down" on cue is priority #2.

Rye also got a new food puzzle toy which he is loving. He is moderately excited about food, so if he gets too frustrated, will give up easily on puzzle toys. The difficulty level is just right for him right now, it is a new one I had not seen before from PetSmart. I will post a photo later, but it looks like a double-sphere stuck together (use your imagination) with a hole in one end, but weighed on the SIDE of the opposite end. It is easier than a wobbler type toy, but more difficult than a simple rolling toy. I am very happy with it. The toy would not be suitable for a heavy chewer.

The other thing we really need to work on is being able to call Rye off of Lucy. He loves her and they play constantly. I can call him off strange dogs (ie playing in puppy class), or off of the environment (ie even at the barn at Diane's, new lesson space, arena, etc) but I can't call him off Lucy yet. The last 2 days I've been using Lucy's obedience as a way to provide a reward and it is working.... I think.

Yesterday: I stop Lucy (Rye stops). I call Rye. If he does not look at me, everything remains stopped. If he looks, I call Lucy and they both get to move. When they both get to me, Rye must acknowledge me by glancing at me when I say his name and then everyone is released for more play.

Today: I stop Lucy (Rye stops). I call Rye. If he looks at me, toss a handful of chicken treats to him (both to reinforce looking and to prolong the period he is off Lucy), then let Lucy move. When they get all the way to me, Rye must sustain looking at me after I say his name for 2 seconds. I then dispensed some smoked chicken treats and released everyone to go play.

He softened more easily out of the intense play today, so I am optimistic it will keep getting better. I am hoping to walk them down to the beach again this afternoon if the weather straightens up. It has been very rainy the last hour or so. Guess that means I need to take a nap and read my book :)

If you want to chime in with training discussion feel free - as long as the words "leash" or "long line" are not involved. We are looking at creative solutions here, not just hauling him in ;) 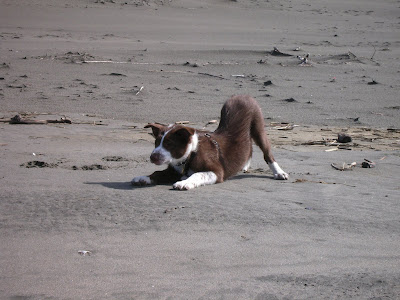 Play bowing to Lucy & Zora (who are out of frame) 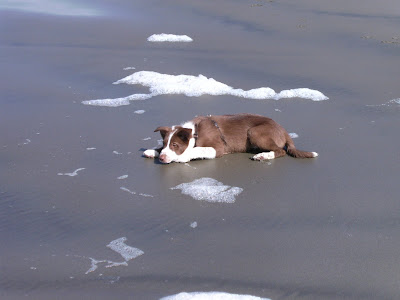 Tired pancake watching the others run for a bit 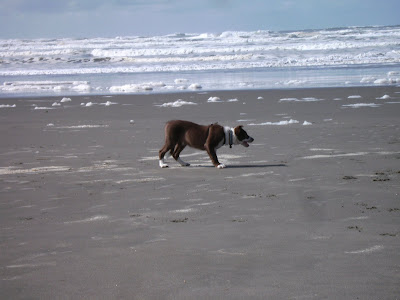 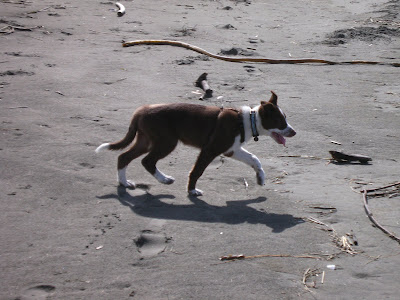 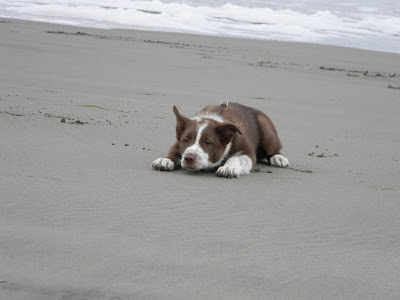 Pancake part II: The Stalker
(Looks like his sire here, I think) 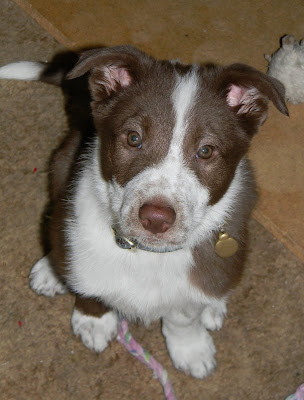 Well this has been a tough couple of weeks. School and work have been very demanding and poor Magick was very very sick. (We are hoping she has a bleeding ulcer but may have stomach cancer... )

So... I have not made as much time for Rye as I might have hoped. I feel this as a constant source of pressure and stress. Inadequacy is the dominant feeling here, as I wish I could be doing so much more with him than I am.

I did manage to take some photos though.

For this week, I am planning to teach him the Manners Minder so I can work on keeping him quiet in his crate at the training center while I teach classes. He is quiet about 70% of the time. Usually quite bad during the first class and quiet for the last 4 classes. Interestingly, he is quiet in his crate everywhere else so far: home with dogs, home alone, at work with dogs, at work alone, in car crate with dogs, in car crate alone. Just noisy at the training center. Argh!

Oh, and also he can jump on the sofa now. Guess "off" is this week's project.

It seems not so long ago he barely stretched between these feet - and now here he is at 10 weeks, can't fit between them at all! 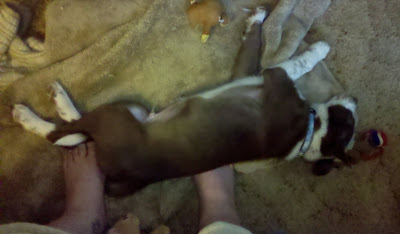 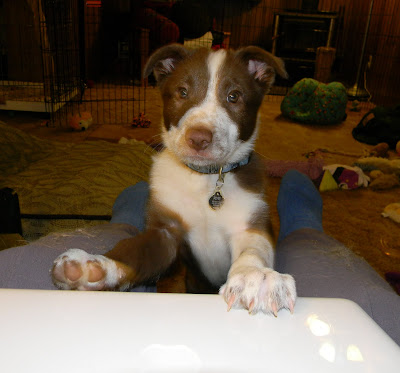 Mom, can you please stop doing homework and PLAY WITH ME?!

At work, Rye can't decide if it is more important to touch Lucy or Magick 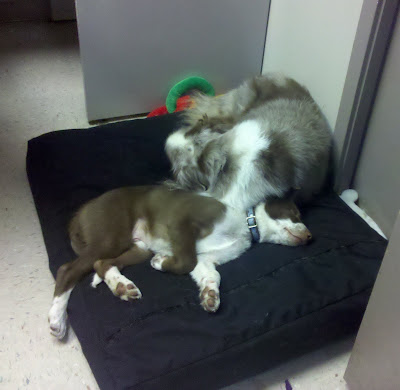 Apparently the indecision was temporary... 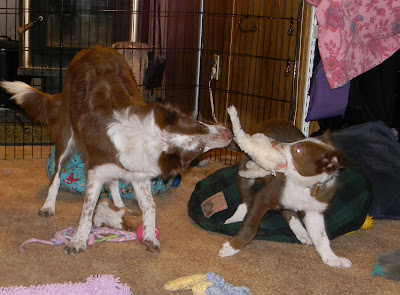 Rye and Lucy still spend a lot of time playing together 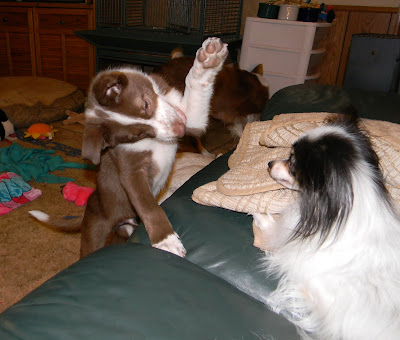 Rye is learning to play with Zora in appropriate ways.
They often run through the house playing chase. 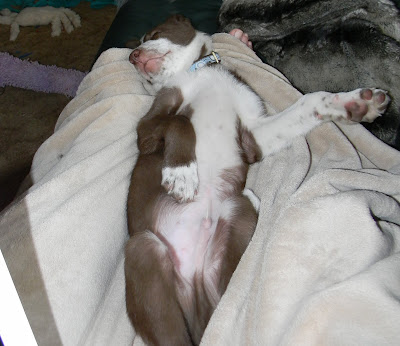 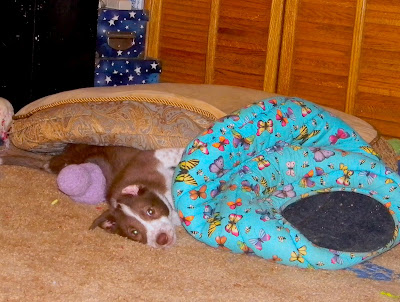 Rye loves to burrow UNDER dog beds all of a sudden. 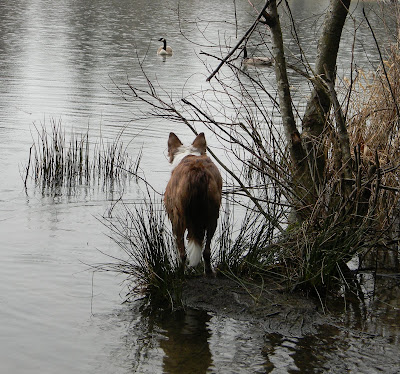 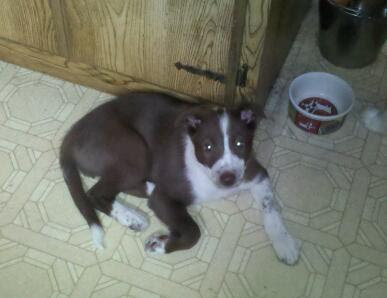 Rye follows me from room to room and lays down behind me.
Here he is in the kitchen, waiting while I cook. 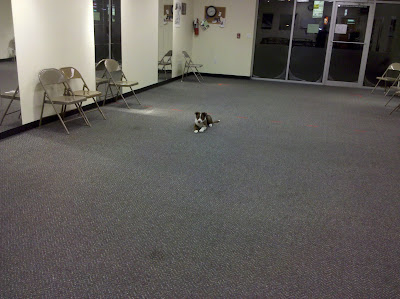 And lastly, he has started learning how to sit and stay, and down and stay.
Practicing at the training center after my students have left for the evening. 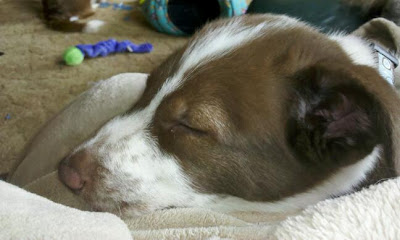