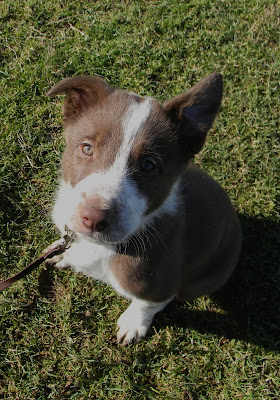 Rye had a fun week.

- Introduced tug-release-sit-tug sequences. Worked on this x 3 this week. Video below of our first training session on this.

- Nose-touch on my hand reintroduced after 2 week break. Going well.

- Introducing the cue "Visit" when I want him to have permission to visit a person.


Places we went (other than to work every day):

1) Field trip to PetSmart Friday and Reber Ranch Sunday:
- Check out the automatic sliding doors (no worries) and rest of the store
- Meet about 20 strangers
- Get fitted for a harness (I like harnesses for long pleasure walks for pups)
- Pick out some treats and a toy

3) Trip to Luther Burbank Park:
- Treats for waves crashing on the docks
- Treats for other dogs barking/growling on the other side of a fence
- Longest leash walk so far to test out the harness
- Meet cousin "Cowboy" and Aunt Kim 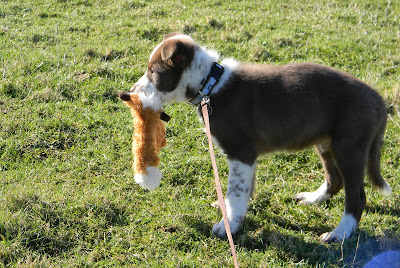 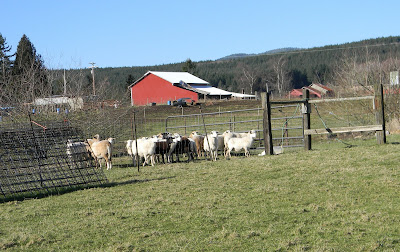 I have been holding off doing much training with Rye because I wanted to use him to demonstrate a few behaviors on a completely green dog in my week 2 beginning class this week. It was a BIG success.

- Learned we need to work on individual crating with no other beings in the room (ie no other crated dogs and no people)
- Was the demo dog for eye contact, sit/reward/release and luring into a front-first down.
- Did tug-release-sits for a new person
- Got treats for being barked at by another dog

Overall Rye had a good week. He is about 90% or better on his house training as of today. About one accident every 2 days. Still sleeping through the night quite soundly and his gut is all cleared up which is a big relief. Since his gut is cleared up he is back on his regular food and I introduced a food toy for the first time with tonight's dinner (Kibble Nibble Ball by Premier). He took a bit to work it out but greatly enjoyed playing with his food.

He also got to practice some of his moves on Aunt Lora's sheep. 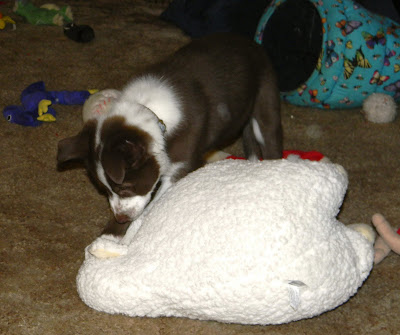 And the ever-important nose grip!

I am really, really enjoying having Rye. It has been nearly 12 years since I had a herding breed puppy of my own and it is a ton of fun. I am treasuring his youth as I know the teenage time will not be as fun for either of us. In the meantime, he is just peachy!
Posted by Monique at 9:25 PM No comments: 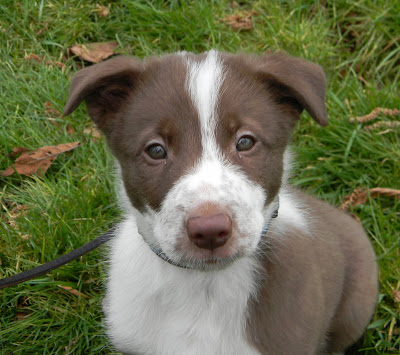 Rye had his first field trips this week. I think field trips are an important part of raising a well-rounded puppy, but caution is required to make sure the field trips are constructive and that the puppy does not get overwhelmed. Yes, I am an overprotective mother. :) In other news, his ears seem to get a bit taller every day and I hope they will stand nicely.

On Friday he got to go to Fido's Farm. He enjoyed meeting a few new dogs including uncle Dodge. He got to watch sheep through the fence: 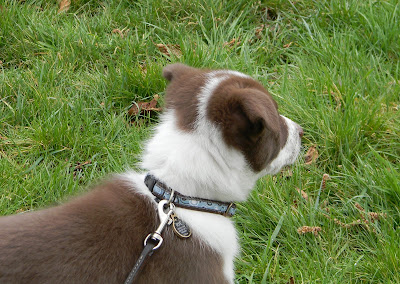 He had fun choosing a fancy expensive new stick (well Mom got a new stick, why not Rye?) 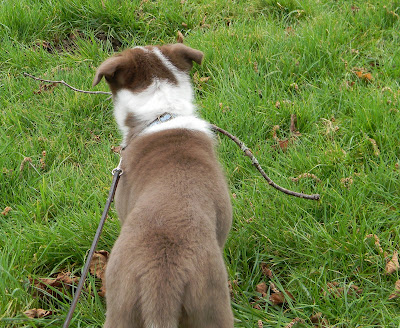 After watching through the fence and getting his stick... I mean crook... he decided to take a stab at handling and started experimenting with my whistle: 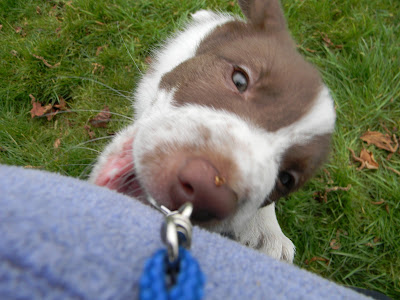 Ok little man, you may be a super genius, but get your own whistle! Ick. Dog spit. Of course, I later forgot and used the whistle again without washing it. Dumb mom.

On Saturday, Rye rode along to Deltabluez Farm to drop off his sister Reba with her new mom Diane. He got to meet the Deltabluez crew and play with the big dogs. I think the Border collie in him thought about coming to the surface, as he was certainly stalking something... 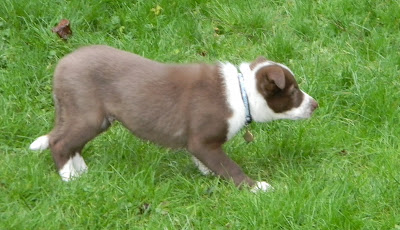 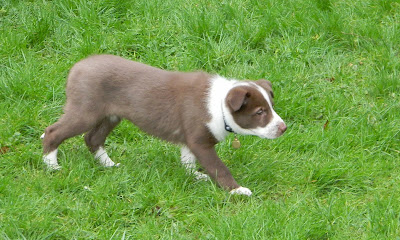 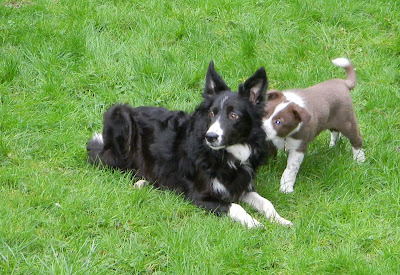 Rye's dog-stalking days will be few as I feel like it is a very bad habit and can create inter-dog conflict. I was surprised to see him doing it though and snapped a few shots before calling him off. Perhaps it is a shade of things to come. You've got a lot of growing up to do, Rye. But you're off to a good start!

Today, Rye got to come along to the dog training center while I taught classes. He got to practice being alone in his crate (ok but a little noisy when I took Magick out and left him behind) and we did some name recognition practice in exchange for tugging which was a big hit! I am very pleased as he seems to be catching on to his name and responding in the house when we call him. Very fun.

Rye was a rock star at work today. He was quiet in his crate for the most part, had fun playing in the office. He BARKED when he was in his crate and needed to go out to potty before the timer went off. There were major bonus points awarded for that trick.

On lunch, we went to a park a few blocks from the office for a long walk with Lucy. He got to drag his long line and run around like a wild man in the big wide open grass. We had a lot of fun playing tug at the park. Tugging in new locations is near the top of the priority list right now.

At the park he also got to see strollers, bicyclists, 2 skateboarders (kinda scary), kids and another adult dog. I did not let him say hello to the dog because 1: he is not fully vaccinated, 2: I did not know the dog and how that dog is with puppies. I am very protective of my puppies because I feel strongly that it is my responsibility to keep them safe from bad experiences to the extent I am capable during their youths. Novel adult dogs are not on the menu right now.

He also had a nice training session for eye contact, and I think he is getting a glimmer of the idea that "Rye" means HIM.

He is a very good boy and I am grateful to have him.
Posted by Monique at 8:12 PM No comments:

A blog just for Rye

Today Rye turned 8 weeks old, and it was the first day I really felt like he was mine. He came to work with me, we trained during lunch (eye contact, sit, down, hand targeting).

I wanted to start a blog for Rye so I can keep an easy journal of our journey together while he learns to be a Border collie, and I learn to be his partner.

So enjoy... the adventure has only just begun. 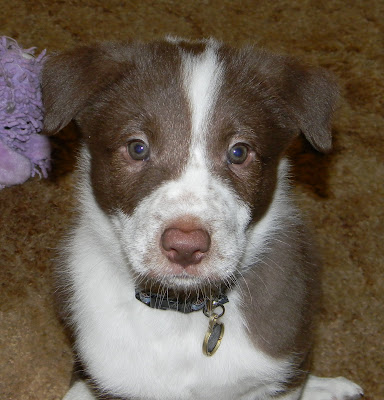 Rye sits for his toy 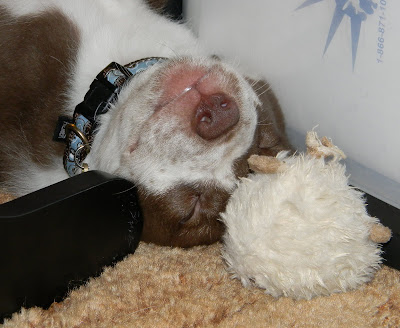